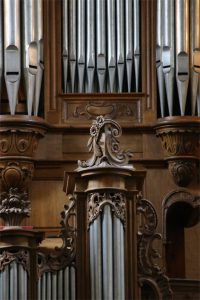 Before the French Revolution, organ builders often settled in episcopal capitals, where they could count on the many convents clustered around the cathedral as potential customers. On the left bank of the high Rhine valley, the city of Strasburg attracted prestigious builders like the Silbermanns. The city of Baselcould not exert the same attraction due to the Reformation, which had driven its bishop to Porrentruy and its chapter to Freiburg im Breisgau, and then to Arlesheim. This is why organ makers who wanted to work in the Basel bishopric, which then included the southern half of Alsace (now the Haut-Rhin département) settled either in the Swiss Jura, at Porrentruy and Saint-Ursanne, or in Alsatian towns, like Ammerschwihr, Ensisheim and Kaysersberg.
Around 1700, Joseph Waltrin (1679-1747), the son of an organ maker from the Vosges, settled in Porrentruy.

He went to Saint-Ursanne as soon as 1703 in order to transform the organ of the collegiate church, which had been built in 1620 by Thomas Schott, an important Helvetian organ maker whose work remains in Muri and Rouffach.
His son Jean-Baptiste (1708-1753) lived in Ensisheim before he became a burgher of Saint-Ursanne in 1750. He worked on the collegiate church organ twice. In 1739, together with Philippe Hartmann, he did a general overhaul and replaced a trumpet by a vox humana. In 1749-50, he remade the windchest to increase the range of the keyboard from 41 to 45 keys and added a cornet stop to the great organ. It is probably on this occasion that Jean-Baptiste Waltrin hired Louis Dubois (1726-1766), born in Montfaucon (Swiss Jura), who succeeded him and appeared to be very active, along with Jean-Jacques Besançon (1735-1811), who came from Saint-Ursanne. Besançon worked successively for Waltrin and then for Dubois, before starting his own business in Kaysersberg in 1766. Then the canons of Saint-Ursanne commissioned him in 1774 to rebuild the organ of his native town, in two new cases. The great body with three pipe towers betrays the indisputable influence of the Silbermanns, while the chair organ, typical of Besançon with its arched pipe-flats, is more modern. Besançon was originally to reuse part of Schott’s pipes, but only the basses of the quint, of the recorder and of the seventeenth from the 1703 great organ, and the cornet from 1749 finally found a place in the new instrument, which contains 26 stops on two keyboards and a pedal-board. When the work was finished in 1776, Besançon settled in Saint-Ursanne permanently. The instrument was regularly maintained in the 19th century, but it lost its reed pipes and the cymbal of the great organ in 1941 due to an intervention by Tschanun. It was first restored in

1984 by Hans-Jakob Füglister, who reinstalled the original composition and the three cuneiform bellows. However, the new elements had not been copied from early models of Dubois and Besançon’s school. During the second restoration made in 2004 by Bertrand Cattiaux, the five reed pipes, the cymbal, the keyboards, the pedal-board, the pedal action system and the rackboards were renewed and the harmony of the instrument was corrected, with a new unequal temperament. The organ of Saint-Ursanne thus became once again one of the most precious testimonies of 18th century Alsatian organ-making, and certainly one of the most endearing.